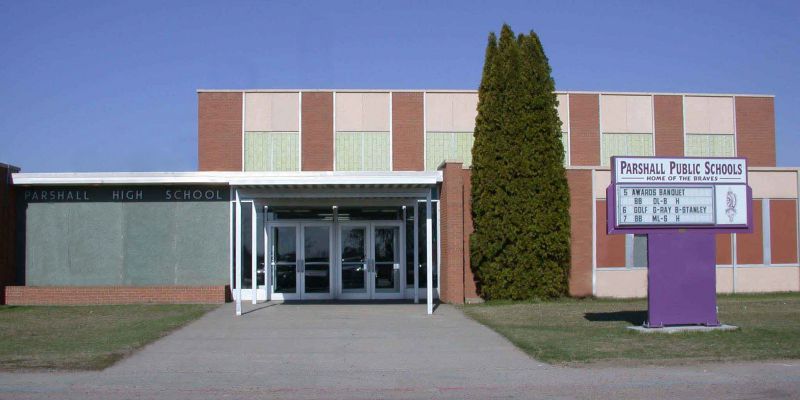 Over sixteen hundred graduates have a filed through the halls of their Alma Mater, Parshall High, in the year beginning in 1926 when there were three graduates–Omar Jacobson, Beulah Needham and Anna Hines– and ending in 1987 with eleven. Incidentally, this class was smallest in number since 1945. The peak years were 1965 with fifty graduates, and 1968 with fifty-one.

The Parshall School system has grown since its inception in 1915-16 from a two-teacher school to one employing staff of thirty educators and auxiliary employees. It is housed in two modern buildings with the addition at the present time of two portable classrooms.

As the Parshall town site was settled and more homesteaders came into the area adjacent to the small town, the need for schooling facilities became apparent. By September 1916 there 114 children of school age.

School began in the basement of the Congregational Church with Clara Blonde as principal and instructor of grades 5, 6, and 7. The lower grades were taught by Mrs. Davis. By September it was evident that more space would be needed, so St. Bridget’s church basement became an additional school room.
In 1917 four rooms in the school basement were ready, but it wasn’t until 1921, that the high school rooms above it were finished. However, by 1917 ten students were ready to enter high school. Lack of a high school necessitated their attendance at neighboring schools such as Plaza and even Minot. Five members of the Colclough family graduated from Minot High, and Florence then retuned to Parshall to teach, beginning a career that lasted 41 years.

In January 1924 the new building was opened for classes, and another story of four more rooms was completed by September 1925. A staff of six taught the elementary and some high school subjects.
Another story was added in the 30’s for the study hall and additional classrooms. One feature of this unique building was the conversion of the basement to a gymnasium-auditorium with a stage which could be raised and lowered as needed.

During the dirty 30’s and early 40’s—especially before the Division of Supervised Study was set up for correspondence high school—many rural 8th grade graduates had no opportunity to further their education. There were no bus routes, no family cars to drive, nor any money to pay board and room in a high school town. Many teenagers, desirous of an education, opted to batch in town, taking a week’s supply of food from home, a few spare pieces of furniture—a bed, a table, a chair or two—clean clothing—bringing the “dirties” back to the washboard and Mom on Friday night. Several Parshall residents turned their spare rooms into housekeeping units for the princely sum of $5 a month, and became surrogate parents during the week (and sometimes much longer if N.D. weather kept the students in town). Some of the well-remembered homes were Lawrence Madsen’s, Axel Olson’s, the Sjol’s Crippen’s and Thorson’s. Many Parshall graduates remember the life-long friendships formed between them and their landlords.

The top-heavy addition was too much of a load for the footings, the building was condemned as unsafe
It became necessary to replace the building, and plans were made to build an elementary school. In 1958 the 9 room modern school was ready for occupancy. It proved to be too small for the ever-increasing enrollment, and with reorganization in the wind, an additional four rooms were added. The administration officers during the construction period were Rev. R. Hauser, Ralph Bartelson, Raymond Hovda, Oscar Huus, John Risan as members of the Board of Education. Lee Ella Schram (Edwards) served as clerk for many years.
Superintendent E.R. Hilde had come to Parshall in 1956. And during his tenure engineered the Master Plan of reorganization as well as the erection of the new schools. This plan created a district of 351 sections of land, replacing 13 former one-room schools and two two-room schools, Wright and Spring Valley. In 1961, 16 additional sections were added, bringing the total to 367.
The new high school at the north end of Main Street was completed in 1963 although classes were held in it during the fall in 1962. Board members then were Wade Williamson, Alex Auch, Marvin Hovey, Ralph Bartelson, B.J. Waldock, Eugene Solomomson, with Lee Ella Schram as clerk, and Mavis Hames as treasure. The buildings had cost $1,020,024.16.Dedication was held April 17, 1963, when the high school was dedication to Superintendent Hilde.

Due to the activity of the Minuteman Missile Complex in the surrounding countryside, there was an influx of students into the Parshall schools during the early 60s, peaking at 854 pupils 1964.
With the operate a fleet of buses to bring in students from the rural homes. For several years, ten buses were used, and at the present time, five are on duty. Now the system is owned and operated by Dietrich and Sons of Valley City who rent the buses to the school district, with Dave Baardson being in charge of maintenance and servicing. Long-Time drivers included Melvin Slind, Bob Nelson, Adolph Ringdahl (20 years record), Tom and Leonard Weinand, Eb Schempp, Stanton Nelson, Bud Hoff, Gene Solomonson, Judy and Jim Jorgenson, Vangie Baardson, Curt Clemenson.
A new dimension was added to the educational setup in 1963 when Lawrence Karsky was hired to administer the department of guidance, counseling and testing for junior and senior high school students. Parshall students have ranked in the upper percentiles both on state and national levels.

The kindergarten program was started as a part of the school system in 1973 with morning and afternoon sessions to accommodate the enrollment of five-year-olds. Genevieve Green was one the first instructors. Due to transportation problems posed by the rural students, the classes are now held full-time on alternate days, and the two sections are only combined for special events and programs.
Another innovation of 1973 was the special education curriculum catering to those students who had needs that could not be in the mainstreaming of regular classrooms. This continues as well as participation in the Souris Valley Special headquartered in Minot but serving several counties. Teacher aids were introduced also in 1973 and assist the classroom teachers with many duties aside from actual instruction.

The first foreign exchange student came to Parshall halls of learning in 1972. She was Yolanda Del Milagros Montoya Virginia Pulido Gomez from Mexico came in 1973 and stayed with the Gervase Millers. She returned in 1985 for the school reunion. Many years have seen at least one exchange student present, and sometimes two or more. Arnold and GorJean Moll of Raub have been the host couple for several. There were three in Parshall during 1985, making their homes with the Clarence Weltzs and Molls.
In January 1963, the Parshall District assumed the responsibility of educating the children going to school at Lucky Mound School on the Fort Berthold Reservation. This meant the addition of another bus or realignment of the current bus routes to include this secluded area. Many Indian students have been enrolled at Parshall, usually making up about 25 percent of the elementary students and tapering off in the high school years.

Though there was an active Parent-Teacher Organization in the early years, records of its activities prior to 1950 have not surfaced. The proceeds of a one-act play in 1951 and a pancake supper in 1952 totaled $825, which was used to buy band uniforms, a project undertaken by the Band Mothers. Other projects supported by the PTA through the years included construction of skating rinks, purchase of a used school bus to take students to basketball games, establishment of a community library in the Parshall Auditorium, promotion of safe driving programs, and availability of milk to the elementary pupils.
PTA also supported the plans in 1956 to obtain a new elementary school as well as the reorganization setup in 1958. Its activities doubled with the increased enrollment in the schools due to the completion of the reorganization plan. Programs were presented by the FFA and FHA; the bond issues for the new Junior and Senior High School were discussed; a junior trampoline was purchased for the elementary school; flags for each room were purchased; parent-teacher conferences at the elementary school were set up; a committee was appointed to oversee the planning and completing of the landscape of the school yards; arrangements were made to have the county bookmobile stop monthly at the school.
Gradually the interest in PTA lagged as other organizations in the school and community gained momentum. A PTO replaced the PTA but soon died because of poor attendance of teacher and patrons.

The Band Parents took over the support of the band activities, and the Lettermen’s Club and the Quartermaster Club the sports program. Parent-teacher conferences twice a year were arranged for by the administration to allow parents and faculty to discuss pupil progress on an individual basis.

In October 1984 a group of concerned parents attempted to revitalize the PTA to foster better understanding and communication of the school’s problems and needs among the patrons, teachers, school board and administration. Tom Needham, president, headed it; Richard Ruud, first vice president; Eva Myers, second vice president; Ellen Hanzel, secretary; and Arline Nelson, treasurer. Meetings are held several times a year and input is from the community as well as school patrons.

According to records available, the superintendents have been: James Learn, Frank Duggan, and George Mellem, Virgil Reed, James McPherson, J.J. Sehr, E.J. Pfugrath, Harold Wall, Reid Elwell, Victor Burchill, E. Castelman, E.R. Hilde, T.P. Lenhardt, Herbert Kringen, Clarence Weltz, H. Friedt; a period covering the years of 1926 to the persent.
Many have done upkeep of the buildings and custodial work, but perhaps the names of those best known would be Melvin Erickson and Ole Hanson. The hot lunch program ably served in both schools has had a series of cooks—the best remembered being Tillie Tompers, Ovida Butler, Elnora Jones, Fren Olson, Evelyn Brendle, and Verona Geving.

Through these halls have passed many students, taking with them a formal education and pleasant memories-for the most part-of their school days. From the rank and file some have gone on to make their names well known. The third and fourth generations of the first scholars are now attending classes in Parshall. Long remembered will be Ruth Olson Meiers, the first women to become Lieutenant Governor, now head football coach at Minot State; Dr. David Deberti, National FFA Farmer, instructor at a college in Lexington, KY; Robbie Blatherwick, explorer scuba diver, Green Beret, mountain climber in South America, now pausing to do humdrum work in Parshall; Dr. Robert Hankins, a well known physician now practicing in Minot. The list could go on and on, but the graduates of Parshall High have their places in the sun!

With the publishing of the previous article in the 1989 Parshall Diamond Jubilee book, came memories of other school and school related events. After visiting with current and former teachers and students plus searching through annuals on file at Parshall High School the following facts were gleaned. Perhaps they in turn will help the reader to recall other facts and memories of days and events in the Parshall Schools.